Learning outcomes Candidates should be able to:

(a) recall the chemistry of halogenoalkanes as exemplified by

(i) the following nucleophilic substitution reactions of bromoethane:

(ii) the elimination of hydrogen bromide from 2-bromopropane

Halogenoalkanes are compounds in which one or more hydrogen atoms in an alkane have been replaced by halogen atoms (fluorine, chlorine, bromine or iodine). We will only study only compounds with one halogen atom

They are also called as haloalkanes or alkyl halides

Haloalkanes can be classified depending on where the halogen atom is in the carbon chain.

We have Primary, secondary and tertiary haloalkanes

Secondary haloalkanes: The halogen is attached to a carbon with two alkyl groups which can be equal or different.

Tertiary haloalkanes: The halogen is bonded to a carbon that has three alkyl groups attached. 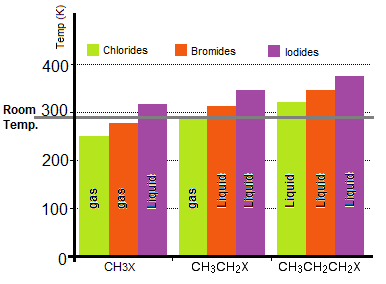 The chemical reactions that haloalkanes undergo are SUBSTITUTION REACTIONS where the halogen is replaced by something else.

The CARBON-HALOGEN bond breaks and the halogen keeps the electrons of the bond producing a carbocation.

If you compare the electronegativities of the haloalkanes, you will think that the best forming carbocation would be produced by the fluorine, but the bond enthalpy prevails and the easiest carbocation will be formed when Iodine is attached to the carbon atom.

This is the direct replacement of the bromine atom in the molecule with a hydroxide (-OH) group, giving a bromide ion.

This can be achieved in a variety of ways. Water is the main reactant needed, to provide the -OH group. Some sort of acidic catalyst is also needed to help remove the halogen atom –

(ii) or silver nitrate solution, which reacts with the halide ions produced, removing them from solution, as a silver halide precipitate, and pushing the reaction equilibrium over to the products.

This is the direct replacement of the bromine atom with a nitrile group (-CN), giving a bromide ion.

The reactant is either hydrogen cyanide (HCN) or more likely an acidified solution of an alkali metal cyanide salt (e.g. NaCN, KCN ) in an alcoholic solvent.

This is the direct replacement of the bromine atom with an amine group (-NH2) (see amines in chains and rings and spectroscopy), giving hydrogen bromide.

The reactant is ammonia at high pressure in sealed vessel.

ELIMINATION OF HYDROGEN BROMIDE FROM 2-BROMOPROPANE

This type of reaction involves the removal of a group of atoms from a compound, giving two neutral compounds.

In this case it is the removal of hydrogen bromide (HBr).

The reactants are virtually the same as with the hydrolysis of bromoethane, i.e. alcoholic alkali(aq) – with the added condition of reflux (i.e. heat to boiling).

There is always a competition between the substitution and elimination reactions. The refluxing pushes the reaction over to elimination.

There are only two reaction mechanisms that concern us here. They are both variants on the theme of nucleophilic substitution –

There is one mechanism for 1° haloalkanes and another slightly different one for 3° haloalkanes. They both depend on the polarisation of the carbon-halogen bond present in the molecule.

This mechanism involves only one stage – the simultaneous attacking by the nucleophile and expulsion of the halogen atom from the molecule.

e.g. hydrolysis and reaction of cyanide ions and ammonia with bromoethane.

Two molecules are involved in the rate determining step (in fact the only step in the reaction) and therefore the mechanism is called Substitution  Nucleophilic 2 or SN2.

This variant mechanism involves two separate parts. Firstly, the breaking of the C-X bond and then theformation of a new C-Nu bond.

e.g. hydrolysis and reaction of cyanide ions and ammonia with 2-bromo-2-methylpropane.

One molecule is involved in the rate determining step and therefore the mechanism is labeled SN1. (SubstitutionNucleophilic1).

The rate of reaction of 1°, 2° and 3° haloalkanes depends on the mechanism followed by the particular compound.The rate of any reaction can depend on a number of factors including heat and pressure. Another important factor is the ability for molecules to collide with one another in order to start a reaction.

With 1° haloalkanes the mechanism followed is SN2, because the carbon-halogen bond can be attacked by the hydroxide ion,

With the 3° haloalkane the central carbon atom is hidden by the surrounding methyl groups,

this prevents the hydroxide ion from attacking directly.

As previously mentioned SN2 depends on two molecules colliding with one another before any reaction can occur. This is inherently a slow process and depends on a chance occurrence.

3° haloalkanes on the other hand follow an SN1 pathway since the carbocation formed is stabilised by the alkyl groups attached to the central carbon atom. The 1° haloalkane does not form a stable carbocation so does not follow SN1.

SN1 relies on the spontaneous splitting apart of a single molecule. Whilst this itself is not particularly fast it is a lot faster than the chance collision of two molecules in SN2.

2° halo compounds follow a mixture of the two reaction mechanisms and therefore are faster than the 1° compounds but slower than the 3° compounds.

The relative rate of reaction of the various halogen compounds depends on the strength and polarisation of the C-halogen bond.The average bond energies for the four types of C-halogen bond are –
The change in the bond energies is due partly to the increased size of the halogen down the group leading to poorer orbital overlap forming the C-X bond.The relative reactivities follow these energies with the weaker C-I bonds being the easiest to break and the stronger C-F bond being the hardest.

Whilst technically chlorobenzene is a 2° halo compound, because there are two carbon atoms attached to the C-Cl group, it reacts in a totally different manner.The aromatic benzene ring prevents the normal substitution reactions that would occur with normal 2° haloalkanes. The C-Cl bond is a lot stronger than normal partly because of the increased overlap with the p-orbitals of the ring.

Therefore chloroform will not undergo hydrolysis or react with ammonia or cyanide ions as any other 2° haloalkane will.

Haloalkenes make up a number of addition polymers including poly(chloroethene) and poly(tetrafluroethene).

Many chlorofluorocarbons (CFCs) were used in the past as refrigerant and general propellant gases. These have been replaced by small chain alkanes which don’t harm the ozone layer but are a lot more flammable.

Haloalkanes can be used for anaesthetics. These include chloroform, CHCl3 (which was one of the first widely used anaesthetics) and chloral hydrate, CCl3C(OH)2H (aka “a Mickey Finn”). A modern anaesthetic is halothane, CF3CHBrCl.back to top