Knitting For a Cause

Experimental Determination of the Gas Constant

The objectives of this lab are to experimentally determine the value of the Gas Constant, R, and to practice using the Gas Laws to solve a variety of problems.

A gas is the state of matter that is characterized by having neither a fixed shape nor a fixed volume.  Gases exert pressure, are compressible, have low densities and diffuse rapidly when mixed with other gases.  On a microscopic level, the molecules (or atoms) in a gas are separated by large distances and are in constant, random motion.

Four measurable properties can be used to describe a gas quantitatively: pressure (P ), volume (V ), temperature (T ) and mole quantity (n ).  The relationships among these properties are summarized by the Gas Laws, as shown in the table below.

A closer look at the Combined Law reveals that the volume of a gas depends on both the pressure and temperature.  Thus, if the volumes of two gases are to be compared, they must be under the same P and T.  A commonly used set of P and T reference conditions is known as Standard Temperature and Pressure, or STP.  Standard temperature is defined as exactly 0 °C (273 K) and standard pressure is defined as exactly1 atm (760 mm Hg).

The Ideal Gas Law is obtained by combining Boyle’s Law, Charles’s Law and Avogadro’s Law together:

Here, P represents as the gas pressure (in atmospheres); V is the gas volume (in Liters); n is the number of moles of gas in the sample; T  is the gas temperature (in Kelvins).  R is a proportionality constant called the Gas Constant, and has a theoretical value of 0.08206 L·atm/K·mol.  Note that the units of R will allow the units of P, V, n and T in the Ideal Gas Law to cancel correctly.

In this lab, students will measure various properties of a sample of hydrogen gas in order to experimentally determine the value of the Gas Constant, R.  The single displacement reaction between magnesium metal and hydrochloric acid will be used to generate the hydrogen gas:

Students will then obtain the following values for the collected sample of hydrogen gas: (1) Volume, (2) Temperature, (3) Moles, and (4) Pressure.

Finally, to determine the value of the Gas Constant (R), the quantities V, T, n and P obtained for the hydrogen gas must simply be substituted into the Ideal Gas Equation.  Students can then evaluate their accuracy in this experiment by comparing their experimental result to the true theoretical value of R, and by calculating their percent error.

Concentrated HCl is dangerous!  Handle it with extreme care as demonstrated by your instructor.  If any spills occur, inform the instructor immediately.  Wash under running water (sink or shower) and use the neutralizing sodium bicarbonate solution supplied at the sinks if necessary.  Also note that hydrogen gas is flammable, so be sure to have no open flames nearby when you perform this experiment.

2.   Carefully sand the outside of the Mg ribbon to remove any oxide coating.  Do not sand on the bench top!  Place the Mg ribbon on a paper towel while sanding. clean it with the paper towel to remove any dust. Weigh the cleaned Mg ribbon and record this mass on your report form.  Note that this mass should be less than 0.040 grams.  If it is heavier, your Mg ribbon will have to be “trimmed” by your instructor.

3.   Wrap the Mg around the end of the copper wire.  Do this in a tight ball with only a small gap between layers.  Then wrap the copper wire to form a cage around the Mg ball.  The cage must be tight enough to keep the Mg inside, but loose enough to allow water to easily flow around the wire.  Roughly 3-cm of copper wire should be left over as a “handle” (see Figure 1).

Eudiometer Set Up and Reaction

4.   Obtain a eudiometer tube and stopper (with holes) from the stockroom.  Use the burette clamp to hold it in place, open end up.

6.   Hang the Mg ball inside the open end of the eudiometer, around 2-cm down from the top.  Then insert the stopper into this end, and, while holding it in place, quickly invert the entire tube into your largest beaker ¾ filled with water.  Clamp the tube in the water in the upside down position (see Figure 2).

7.   The reaction will occur as soon as the acid diffuses down the tube and reaches the Mg ribbon.  As hydrogen gas is generated it will fill the eudiometer by forcing the water out of the tube and into the beaker via water displacement (see Figure 2).  Allow the reaction to proceed until no Mg is left and no further gas is formed.  This should take 3-5 minutes.

8.   To ensure that the pressure of hydrogen (and water vapor) in the eudiometer is equal to atmospheric pressure, the level of the water inside the tube must be the same as the level of water outside the tube.  To achieve this, transfer both the tube and the beaker of water into the large bucket of water in the sink.  Then raise or lower the tube until the internal and external water levels are equal.

9.   After equalizing the water levels, record the following measurements:

10. When finished, repeat this entire procedure a second time with a fresh piece of magnesium ribbon. 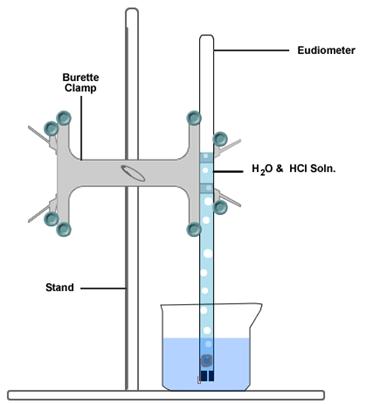